Editor’s note: This story was originally published in January 2017. It has been updated for accuracy and comprehensiveness.

On January 10th, 2017 Google updated its search algorithm and the change may end up influencing your marketing strategies.

The biggest change Google made relates to the appearance of content on mobile devices and how Google factors that in to mobile SERP rankings.

We have been receiving some inquiries on this change and its effect on Picreel pop ups, so we thought we’d follow-up with what we know so far and see if any webmasters have noticed any issues.

Google is now penalizing pages where content is instantly hidden behind interstitials. Interstitials are widgets or irrelevant popups that appear before the actual content of the page. Examples include display ads or forms that confirm a user’s age before allowing them to access a site. People get understandably annoyed by such displays and Google’s new change aims to cut down on those annoying widgets.

What About Your Picreel Popup Ads?

Given that interstitials may include popups ads, it’s no wonder that Picreel users are worried that the use of the plugin will penalize their website.

As a Picreel user you already know that using relevant and targeted pop ups can play an important role in your acquisition strategy, and you don’t want to give it up. But you also don’t want to be penalized and fail your marketing efforts by tripping Google’s bots.

The good news is there are plenty of legitimate ways to keep your pop ups running and doing their job of converting your traffic. Even better, Picreel is already compliant. Here are a few facts to help answer any popup questions you may have: 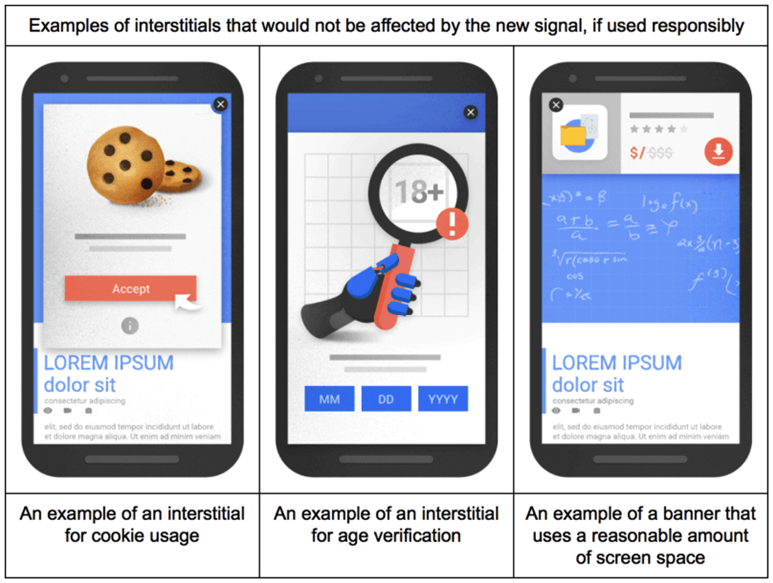 Did you notice the close button? Make sure your pop ups are also easily dismissible.

Do you use pop ups as a part of your marketing strategy? Did you revisit your strategy after the Google update? Have you noticed any changes in your mobile rankings? Let’s discuss in the comments below.

How to Build a Popup That Opens on a Button Click
8 Valentine’s Day Marketing Campaign Ideas We Love
How to Collect Emails: 25+ Proven Ways to Collect Email Address
Ecommerce Personalization: Everything You Need to Know

What is a Popup?
Top Exit intent Popup Examples To Boost Conversion
How to Create Popups in WordPress
How To Create Engaging Video Popups
Types of Website Popups to use in 2023 - The Complete Guide
Email Popup Examples That Help To Convert in 2023
20 Best Popup Maker Options For WordPress
40+ Best Conversion Rate Optimization Tools
65+ Best Lead Generation Tools
10+ Popup Best Practices To Drive Conversions
10+ Best Opt-In Email Strategies With Examples
How To Add Popup on Shopify
Do you want instant
300% growth?
Picreel popups can get YOUR website 300% instant sales growth. See Case Studies.
Get Started Free Get a Demo